This article covers types of circuits with insufficient content to justify their own articles.

The timing of the output activation and deactivation can be changed by adjusting the delay on the repeaters.

All of these designs can be extended indefinitely.

The Block Update Detector switch, or BUD, detects any time an adjacent block receives an update. An update is anything that changes that block's state: block placed, destroyed, door opened, repeater delay changed, cake eaten, grass growing, snow falling, furnace used (or turns off), and so on (chests opened and crafting tables used do not cause updates, sleeping in a bed does). When a block is updated, all adjacent blocks are also eligible for an update, and this can be used to produce a redstone signal or for other purposes.

BUDs have been used for all kinds of things, from traps to detecting daylight to locking mechanisms on hidden doors.

There are many models of auto resetting BUDs. This is done by having the firing of the BUD switch somehow cause the BUD switch to restore the pre-fired state often when fired it cuts the power to the piston, allowing it to retract. This is done either by extra circuitry or, as in the example below, by the properties of blocks themselves.

Boats are easily moved by passing mobs (including players) -- only use this BUD in areas where mob movement is absent.

In Minecraft 1.8, a new BUD is available. This is so far the simplest BUD in Minecraft. Its created by placing a redstone block on top of a slime block on top of a piston. The BUD works with the BUD-powered piston wich is powered by the redstone block trough the slime block. It takes 1 tick to give an output but 0 ticks to reset itself, so its a powerful and easy BUD.

A multiplex circuit may consist of a multiplexer, a relay, or both.

A multiplexer (aka "mux") or multiplexor (both are correct) is a device that selects one of two or more inputs and outputs the selected input. This multiplexer can be chained together, allowing for multiple bit multiplexing.

For these designs, the inputs are labelled A and B. C is the "control" input: whether A or B passes through depends on whether C is powered or not.

While the block is moving, both A and B can pass through at the same time -- in practice, this just means the transition takes 1.5 ticks when going from a high signal to a low, and instantly for all other cases.

The demultiplexor is the reverse of the multiplexer. It allows you to have one input be sent to either of one of two or more different outputs. Here is a schematic of a demultiplexer with 4 outputs. 'I' represents the input, 'S' represents the selectors and 'f' the outputs. The two selector wires,holding a two digit binary number (2 wires = 2 digits), are passed to a decoder which passes. If the input wire is on, then the output wire of the demultiplexer corresponding to the output of the decoder will turn on. For example, if the input is on and the binary number 10b is passed onto the select wires (S0=on,S1=off.Start count at zero!), then the decoder will turn on the third wire (10 in binary is two,but because we start count at zero it will be the third). An AND operation is performed beatween the input wire of the demultiplexer and each of the outputs of the decoder. As I said earlier because both the input wire and only the 3rd output of the decoder is on, only the third output of the whole demultiplexer will be on. Demultiplexers are used as decoders with the option to have ALL outputs turned off (done by turning off the input wire). The two schematics on this page are those of a 2 bit demultiplexer. A demultiplexor is not a relay. A relay is an old electronic component that was replaced by transistors in the 70s (please clarify the decade). Even though a 1-pole relay is the same as a 2 bit demultiplexer, a more complex demultiplexer would be made of many relays (and in the currant century of transistors). The closest thing in Minecraft resembling a relay or transistor is the Redstone torch.

A random number generator (aka RNG, or "randomizer") is a circuit that can generate numbers with no recognizable pattern.

The RNGs below depend on the stack maximums of the items they push:

The output power level can be used as is (for example, to subtract 1 or 3 from a comparator in subtraction mode), but more often the output is connected to a line of two redstone dust so that the output is 0 or not 0 (to randomly power a repeater, activate a mechanism component, etc.).

Variations: If the dropper is powered indirectly (for example, by quasiconnecitvity or an adjacent powered block), the hopper won't be deactivated and will immediately push the item back into the dropper. This turns the circuit into a monostable rising edge detector with a 3.5-tick output pulse (still with a random power level of 1 or 3).

Outputs power levels 1, 2, or 4 while on, power level 1 while off (but see variations below).

Before the input turns on, the hopper's five 16-stackable items are enough to produce a power level 1 output from its comparator (even a single 64-stackable item would be enough for that). These five items should never be returned to the dropper, so the comparator's output will never drop below power level 1.

The hopper is held deactivated by the powered dust when the circuit is off, and by the powered dropper when the circuit is on. But, when the input turns off, there is a brief 1-tick moment when the dropper has just turned off, but the torch attached to it hasn't turned on again. This allows the hopper to activate for 1 tick, pushing an item back into the dropper. A hopper always pushes items from its left slots first, so the hopper will push back the item the dropper pushed into it, rather than any of the 16-stackable items in its far right slot, allowing the circuit to reset itself.

You can add additional redstone dust leading from the hopper to a block next to it, and then down to the side of the comparator. This 2-wide variation will keep the comparator's output off while the input is off.

Additional items can be added to the hopper to increase all of the output power levels. 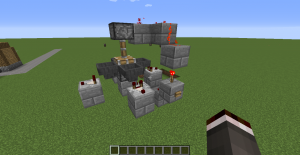 A random selector is a circuit that selects an available output at random.

The random selector (right) depends on the random flight of an item from a dropper.

The input (button) in this random selector turns off the torch, deactivating the piston. It also powers a redstone dust directed into the block, powering the repeater and activating the dropper. The piston then reactivates to push the stuck item (if any). A hopper collects the item and puts it back into the dropper, activating a comparator.